Tomorrow we head down to the shore for our 9th trip to Ocean City. We discovered it by accident. Years ago we were looking for a mellow place to be with 3 families and their 2 year olds. We'd never been to the Jersey shore before and discovered the retro wonderfulness of OC, its endless boardwalk, quiet beaches, quirky main street, and the joy of Hoy's 5&10. Each year we went back, with different family configurations, relatives popping in, people camping out in different bedrooms. This is the first year we're going just us. I'm planning on bike rides every morning. Reading a book on the beach. Custard cones every night. I can never remember if it's chocolate and mint or chocolate and peanut butter I love best. Sparklers up on our roof deck. Photos at sunset on the beach—every year they are the best photos I ever take.
Posted by Elissa Stein at 9:56 PM No comments: 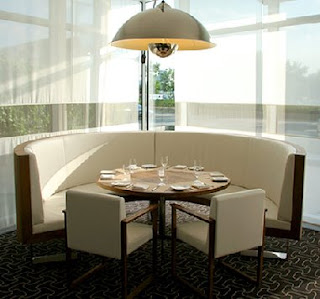 Normally, I don't stress about meals. After suffering through anorexia for more than a decade, I do everything I can to keep anxiety away from food. But, 2 weeks from yesterday, I've got a lunch, no, make that LUNCH, that's already got my insides wrapped up in knots. My agent is hosting an editor's luncheon at a fabulous restaurant in a stunning Richard Meyer building by the Hudson. 12 to 16 people (or as many as we can round up in 13 days in the middle of August) talking about Flow.

In certain situations I excel at small talk but I'm afraid this isn't going to be one of them. Sigh. On the other hand, I so believe in this book and have yet to find someone not interested in some aspect of it.

My biggest dilemma at the moment . . . what to wear. And can I possibly get my hair cut before then.
Posted by Elissa Stein at 8:17 AM No comments:

Last night I read a piece by Stephen King in Entertainment Weekly about how much time people spend online. First, I have to say, he's my favorite columnist in the magazine. His writing is insightful, honest, and funny which often takes me by surprise as his books scare the hell out of me. Back to the article, he was surprised, shocked, at how much time he actually spent in front of his computer. He kept track for a couple of days and between writing, emailing, researching, youtube, hulu and more, it was almost 8 hours. I think I'd beat him flat. While I might not always sit for hours straight watching hulu and youtube, I get lost on ebay, spend too much time checking facebook and twitter, check various news sites for what's going on in the world, answering email. Oh, and then there's writing and designing. I can't imagine a day without being online and even when I'm not in front of a computer, I can always check the same things on my iphone.

I have to take a moment and switch gears to Sarah Palin's quitting the governorship speech. Last night it was a big story on the news—and countless people talked about how she's not a quitter as the main story was her quitting her job. WTF? The people in this country scare me sometimes.
Posted by Elissa Stein at 6:29 AM No comments:

Today in a lovely yoga class, the teacher talked about her goal of sadhana—practicing yoga for 40 days straight. Any missed days meant having to start back again at one. That the dedication and ritual of the 40 were steps on the path to accomplishment. Hmm . . . that sounded far more granola that I thought it would be I'm sticking with it.

She inspired me to commit to 40 straight days of writing on my blog. I often have the intention of writing every day, but that never lasts more than, well, a day. So today is my first day of 40.
Posted by Elissa Stein at 9:50 PM 1 comment:

It's a strange time to be in publishing, or at least on the periphery of publishing. Actually, I'm sure any aspect of publishing right now is challenging, but I've spent years doing freelance design and it's all disappeared over the past few months. And the work's not coming back. The regular catalogs I put together are now just listings online. The monthly ads? Money's not being spent and in some cases, the publications are folding. Signage, posters, postcards—things of the past.

So now what? Someone on twitter just offered me his free e-book called "Stop Slogging Start Blogging," and while it certainly motivated me to post something here, I just don't see a lucrative future in online observations about my life. People do it. Twitter is full of social media experts with tens of thousands of followers but I can't quite figure out what they're doing or why people are following.
Posted by Elissa Stein at 1:52 PM No comments:

another night in nyc 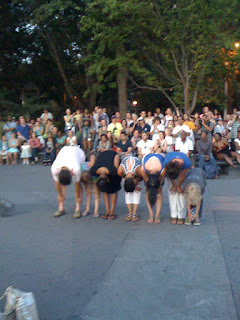 After a really lazy afternoon, I needed to go out and breathe fresh air. It took much cajoling to convince everyone to "just walk we don't have to stay long" to Washington Square Park. There was a performance going on near the fountain, we stopped to see what it was about. Three black guys were talking up their future performance, stoking the crowd, cracking racial jokes at just about everyone. And then they broke into dance. Not bad, worth staying to watch. They started pulling volunteers from the crowd. Four women were standing in a line when one of the guys looked at Jack and said, "kid, can you raise your hand?" Jack did. "You just volunteered," and the guy pulled him into the circle. Several more were picked and then there was a good solid 20 minutes of eeking out as much money as possible from the onlookers. These guys had their routine down—even this part was funny. And it was cool that our evening walk to a local park was also the destination for people from Cuba, Iran, Columbia, Jamaica, Lithuania, South Dakota, Texas, to name a few.

The grand finale—one of the performers ran at full speed and flipped over all seven people standing side to side. Amazing. And just as they promised, no one got hurt.
Posted by Elissa Stein at 9:21 PM No comments: 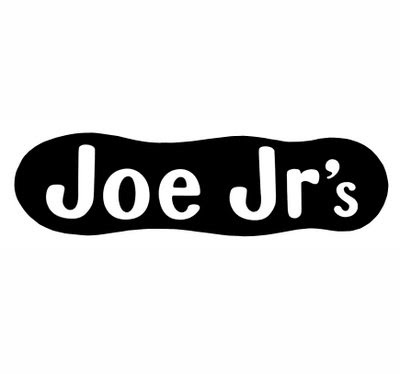 Joe Jr's, my local coffee shop/diner, was forced to shut down last weekend. After 35 years the landlord wouldn't sign a lease and a long-standing family business had 4 days to clear out. My neighborhood will never be the same—the comfort, the closeness, the small town-ness of Greenwich Village has had a whole ripped out of its center.

Of all the places I've known in my life, Joe's is the one that I will miss most. Every time I walked by (and that's often, as I live across the street), someone inside waved to me. I'll me the pea soup with croutons on the side on Mondays/Saturdays. Greg's nod. Sosa's smile. Pedro's squeaks. Effy's understanding and sympathy—she could tell when things got too much for me. Neighbors and friends sitting at the tables by the window. The regulars at the counter always saying hi. It was where we ate after every vacation. The place my kids chose to celebrate special occasions. It was going to be my daughter's first job. The owner's son promised she could seat people when she was 12, the same age as his cousins were when they started working there.

We came back to the city last Wednesday night, walked by and saw a shocking sign in the window—that Joe's had until Sunday to clear out. All I could think was that we, anyone, everyone, the owners, the neighbors, had to fight to keep this from happening. I ran upstairs, whipped up a petition and flew back down so people would have something to sign, to register their protests. I got in touch with a friend at ABC, who had a news crew down to do a story the next morning. I called TV stations, newspapers, local politicians, the mayor's office. I called people who worked there, emailed everyone I know who'd been there at some point. I don't know that I've ever fought so hard so fast for something not to happen. At times I felt like time slowed down, that the pain was as if someone close to me had died. And then there were moments of elation, of energy and hope when people rallied together on the sidewalk outside, exploring ways to keep the doors from shutting for the last time.

Every time I walked in, it got harder and harder to leave, as I knew, eventually, that the last time was near. I met countless people who shared moving stories. The woman who snuck her dying mom out of the hospital for one last real meal. Her mom only wanted to go to Joe's. The people who remember meeting Teddy, the owner, for the first time, 35 years ago. The people who moved away years ago, but came back, in tears, for one last meal. The grownups who started eating at Joe's when they were still in booster seats. The man, now with a walker, who had breakfast there every morning and didn't know where he'd go instead.

We had breakfast there Saturday morning. We went back later for lunch, after I spent hours making us all Joe Jr's t-shirts. They were already out of french fries, of feta cheese, of white bread. We spent hours huddled in a booth with people who had been strangers 2 days before, whose shoulders we were now sobbing on. We stopped by later that night and stood as long as we could, on the sidewalk with all the other people who just couldn't let go. We all wanted to believe that this was a bad dream, that there would be some 11th hour miracle, that this couldn't really be happening.

Teddy, the owner, called me in and handed me an apple pie. Greg hugged me and I fell apart. I don't cry in public, but there I was, shaking, tears streaming down my face. My husband helped take the Joe Jr's sign off the building. And the next morning, no one opened. Instead of heading inside for breakfast, people stood, staring at the locked door. Izzy and I made a poster for people to sign—again, I needed to do something, to keep the reality from setting in.

We were interviewed on NY1 that afternoon: http://tinyurl.com/q4qrkn.

Later that day Greg called—they were coming to clear the place out, please come down and say hi. Again, a crowd formed that was almost glued to the corner. People signed plates, scored menus, took the brown or gold water glasses. I had heartfelt conversations with neighbors I'd barely nodded to before.

Today we missed Iz's toasted corn muffin for breakfast, my decaf light that Greg would hand me in the afternoon, without my even asking, Jack's fries that he craved after school/camp. I've never felt so devastated walking by an empty space.
Posted by Elissa Stein at 9:39 PM 1 comment: