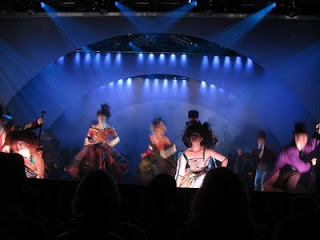 Entertainment at sea can be fabulous. Last night we watched Mama Mia on a giant screen, under the stars, on lounge chairs with pillows, blankets, and freshly popped pop corn. It was an amazing night.

The night before I went to a show so bad I had to walk out, which I've done maybe twice in my life. It was an original Princess musical called "Destination Anywhere" and it went from mediocre to unbelievable to atrocious to impossible to sit through far more quickly than one could imagine. The premise, or so it seemed, was that a woman had been dumped by her boyfriend and had to get away. Anywhere was fine. Hence the show's title and the first number—a not-very-catchy song that featured 60s styled stewardesses dancing in silver sequins and ended with a toy plane traversing the stage. The next song: Viva Las Vegas. Ok, she's going to mend her broken heart in Sin City. That turned into an Elvis tribute as the most faux Elvis I've ever seen launched into "A Little Less Conversation" as he rose up onto the stage. Surrounded by 10 other dancers in matching Elvis outfits, it was truly Elvis-mania. I'm waiting for the soul, the edge, the edge of Elvis but there was none to be found. Next up: Heartbreak Hotel. The blond singer who was trying so hard to be a soulful Britney belted this one out only she couldn't belt. The dancers were sexed up chambermaids and it was quickly apparent they wanted to seduce everyone who came to stay. I figured this had to be why the show was rated PG-13.

And then, without explanation, the show turned into Sweeney Todd, transporting itself to old-style London. Dry ice filled the stage with smoke and dancers slunk about in the dark, as if waiting for Jack the Ripper to attack. The women sang a remake of "A Few of My Favorite Things" about jewelry. It was bad. Really bad. But the kiss of death was when the male singers, dressed in Sherlock Holmes outfits with top hats instead of caps, started rapping. I got ready to go, waiting it out to see if the next number might possibly help. Roxanne. Nope. I left.

I heard today that the show hit The Lion King next, before a Time Warp from Rocky Horror finale.

A quick disclaimer—I didn't take the photo. I didn't stick around long enough.
Posted by Elissa Stein at 4:50 PM No comments:

It's sunny. The sky is blue. We're heading towards the beach. Deep sigh of relief. As long as Iz and her twisted knee, Jon and his completely clogged nose, and Jack and his misery can buck up, it'll be a day in turquoise water and white sand. Mmmm.
Posted by Elissa Stein at 7:11 AM No comments: 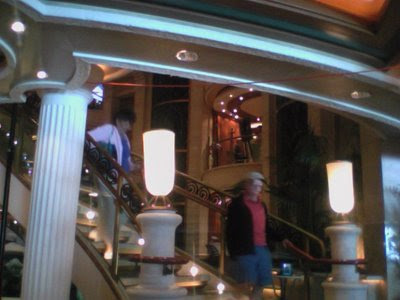 Life at sea is remarkably like life at home. Everyone’s happy just sitting in the cabin and playing Spore. Well, not me. I’m never happy sitting and playing Spore, although, to be honest, I’ve never tried. But just talking about it makes me kind of crazy.

Being on a cruise is too much like being in Florida. Lots of marble, fancy restaurants, and too much air conditioning everywhere. We’re in the Caribbean and I’m freezing most of the time. It’s also anything but beautiful out. It’s not raining—that was yesterday—but it’s super overcast and so windy it’s hard to sit outside. So, Iz and I are sitting outside a wine bar, listening to a string quartet, with laptops set up on a marble table, flanked by faux greek columns and hand blown glass sculptures. In bathing suits. It’s all a bit surreal. So many people who seem so happy and I’m not sure why. My theory has to do with the ease and convenience of walking everywhere. No cars. No traffic. But that’s my day to day life. I love being in a house when I’m on vacation, not surrounded by people, fighting for a deck chair or a table for lunch.

Having said that, I’m wearing flip flops. We spent yesterday at a beach with the most stunning turquoise water I’ve seen in a long time. It was so delicious to lie on a chair, watching clouds float by in a brilliant blue sky. It’s amazing that someone comes and cleans our room twice a day. I LOVE that. He leaves chocolates on our pillow at night.

OK, the string quartet stopped and now it’s a doowop group.
Posted by Elissa Stein at 1:23 PM No comments:

my life as a cruiser

We realized, after thinking about this cruise coming up on Sunday, that it'll be Iz's 4th journey through the caribbean. She's only 10. And I couldn't figure out how many cruises I've been on—they just run together in my head. There was the ship with the really tacky carpeting and terrifying chandeliers (Carnival), the ship with the surprisingly limited food (the line from Italy that I totally can't remember), the ship that was the actual Love Boat (ok, that was kind of cool). The cruise with the horrendous weather and freezing temperatures (that was Scandinavia and I'm never going back). The cruise where we met Mim and Emma and hauled out butts to Trunk Bay (the most beautiful beach I've ever seen), the cruise where my face swelled like the Elephant Man and I ended up in the hospital when I got home. The cruise we all surprised my mother for her birthday—she had no idea and burst into tears when we all showed up at her cabin. The time Iz had her entire head braided and beaded. The beach we visited in Mexico 2 weeks after a major hurricane. The waiter that figured out my mother and brought her one of every dessert without even asking. The trip my mother was convinced my sister was gay (she isn't). The time people we were traveling with forgot their passports and somehow managed to get on the ship anyway (I'm sure they thought it was a miracle from God). The shopping sprees for expensive watches. The delicious 24 hour pizza bars. The ice sculptures. The lead singer who snapped and pointed at every opportunity. Toga night. Roman-esque steam rooms. The stars in the mediterranean. 4 people living in 100 square feet for a week. 4 people sleeping in 2 twin beds because 2 of us were afraid of bunk beds.
Posted by Elissa Stein at 6:28 AM No comments:

be the soda machine

A very wise therapist who's prone to analogies, told me that in the midst of someone else's meltdown, to think of myself as a soda machine. Inanimate, strong, cool, large, implacable, an entity with no emotion, actions, input, no ability to argue, yell, fight, be snarky . . . I love the concept: be the soda machine. Putting it into practice is ENTIRELY something else.

Not naming names, I just have to add that 5th grade is exhausting from a purely emotional place. The anxiety surrounding an audition for the 5th grade play is like an endless stomach ache. For me.
Posted by Elissa Stein at 9:03 PM No comments:

Friday night, while at a kick-ass Toshi Reagon show, I got an email notifying me that my website had been updated. Curious to how that happened, as I wasn't anywhere near a computer and hadn't been updating, I clicked on the url only to find that Jack had published his very own website. I was extraordinarily proud of his hard work, not to mention designer's eye, and left the site up all weekend.

But, tonight I wanted my site back up, so I hit the publish button, fully expecting it to override his site. Nope. I mean NOPE. If I could make that extra black super heavy bold, I would. I spent the last 2+ hours working 3 machines trying to figure out how to ditch my very creative son's handiwork. I had to find where the site was hosted (in my name folder/library/application support/iweb). I deleted his site. Nothing. Went to mobile me (stupid, stupid name) and deleted his site from there. I re-did all the info with my web host. Then, in sheer and total frustration I shut everything down and stormed off to bed. But, even though I had been dead tired 2 hours ago, I couldn't let this go. So, I booted everything back up, researched more and tried uploading all folders, AGAIN, to mobile me. That finally worked.

Now I have to explain to him tomorrow why he can't blog as his site is no longer. That will probably be worse than this was.
Posted by Elissa Stein at 11:06 PM 1 comment: