This morning I had the unique opportunity of spending several hours with my brother, talking about our kidney transplant experience. We were asked to participate in a video our hospital is producing to educate potential donors, recipients and their families about the process.

We were one of 4 success stories that wanted to share.

That in itself is very cool.

I had no that was only the beginning.

Dave and I don't talk about the transplant anymore. While it was front and center for months, now its an occasional reference or offhand joke. Which is great. Life moves on.

And while we were in the middle of it we talked more about next blood test dates or messages from transplant coordinators or poster design (for our operating room signage). We spent almost no time looking back on how we got to this point, how it felt, where we'd end up.

We had the chance to do that today.

I got to tell him he was my hero, that his lifelong perseverance against chronic illness and challenges most of us will never know, is awe-inspiring.

We talked about getting to the point of needing a transplant. Of the realities of dialysis. Of how he'd never known what it was to feel healthy until now. He'd lost his first kidney to cancer at 9 months, the other was irreparably damaged by radiation and from then on his body was always comprised.

I knew that the gout he'd be suffering from for 20 or so years was gone. I found out today that the severe osteoporosis he'd had was significantly better.

Both thanks to his new kidney.

I watched the entire tech crew laugh and sometimes groan at his puns and swift comebacks. He also entertained them by wiggling his ears which is much harder than it sounds.

He learned that I'm a good speaker. It was nice to see my brother impressed with something I can do.

We discussed the tremendous differences we learned to navigate and accept in the months we spent constantly in touch. I'd forgotten how furious I'd become when he likened his surgical team to finding a good car mechanic. Fortunately I can laugh about that now.

And we acknowledged how sick he was.

He was really sick. So sick that I was terrified if the transplant didn't happen in a timely fashion it would've been too late. I couldn't say that out loud before. But now that it's part of the past it felt good to let it go.

We talked about how grateful I was that I was actually able to help after years of feeling increasingly helpless.

And we talked about miracles. Cynical as I can be, I will never stop considering transplants a miracle. That a life can be so dramatically, so positively, so immensely changed. That surgeons and doctors and nurses and coordinators can make this happen, that a kidney can be taken from one body, transplanted into another and make itself at home.

The one thing I didn't say this morning that I wished I had: while this transplant changed his life immeasurably, it also changed mine.
Posted by Elissa Stein at 1:21 PM 3 comments:

Being able to be prepared.

Having a sense, whenever possible about what to expect.

In life that's not always an option, but wouldn't it be nice if, for more run of the mill, mundane situations, instructions were available?

For example, this morning I went for a mammogram. I wish I'd known in advance that I'd be wearing a short hospital gown—I would've shaved. A quick aside: I'd also love to know why this is a no pants allowed procedure. Seriously, my breasts, and I assume this goes for most if not all women, are not below my waist. As long as I'm asking questions, why the short gown for mammograms? Both long and short were available, with a "mammograms" label above the short bin. Do bare legs garner a better test result?

A note posted in the dressing room about whether the gown opening should be in the front or back would be a nice touch. Out of 3 of us in the waiting room, 2 opted for the front, one chose ties to the back. I kept my boots on, as was instructed. The back tier opted for no shoes but stayed in her socks.

A simple notice in the waiting room about what the test actually entails is a good idea. Translated into several commonly used languages.

Also, a printout of what to do after the test is over would help. I discovered, from the technician of my bone density scan, that if a problem with the mammogram had shown up, they would've known right away and one no longer needs to wait in the waiting room for an all clear signal. Glad I asked, I could've still be sitting there in my short pink, tied in the front gown.

A little forethought could save minor anxiety and countless small questions. For me, it's a worthwhile endeavor.

Posted by Elissa Stein at 11:16 AM No comments:

I have been lucky enough to have done some extraordinary things in my life.

I happily (painfully, enthusiastically, worriedly, nervously, animatedly, obsessively) wrote about all of the above. They were events, situations, circumstances that aren't run of the mill and it helped, when going through things I'd never imagined, that stretched and challenged me in ways I wouldn't have thought possible, to write through it all.

And sometimes my words helped others. Patients hoping for health. Creative souls who wanted to believe they could write but didn't have enough confidence to try. People struggling in one way or another with the messiness of life. Reading about my experiences put words to feelings and situations so many others grapple with.

I stopped writing. It didn't feel like what I've been doing warranted time and attention.

But maybe I was wrong.

Maybe small things can resonate as powerfully as the monumental.

Maybe instead of feeling lost and incomplete because I'm not accomplishing epic things, I can appreciate that every day, every single day, there are incredible, soul-nourishing moments.

And maybe that's what life is all about—not just the monumental accomplishments but everything there is.

Like seeing my mom looking better this Thanksgiving than she has in years.

Playing catch, as the sun set, in the pool with Jon, Iz, and Jack.

Having puppies head butt me with excitement when seeing me when I walked through the door.

Melting back into being home after being away.

Sitting with how much I love and appreciate my family.

I am grateful for the extraordinary. And learning to be even more so for the everyday.


Posted by Elissa Stein at 6:46 PM No comments:

Diving Into One Fish 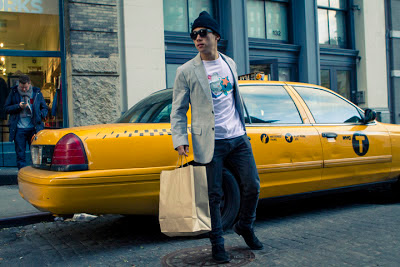 Three apt words One Fish creator/designer/owner Colin Cowley uses to describe the fresh take on fashion he explores in his new clothing company, which launches its inaugural line today.

I was lucky enough to talk to Colin about his vision, his plans, and his backstory right before the world discovers One Fish.

What was your inspiration for your designs?

Inspiration comes from all over. New York City. Fashion culture. Product design that I like but then think about what I’d change. I’ve always been obsessed with colors and shapes, contrast, brights and darks.

I don’t sit down and create on a regular schedule. Creativity comes in chunks. I start with one big shape and see what happens. One idea can turn into a series that can take a month to work through.

What’s the significance of the One Fish name/logo?

I did a huge 10-foot mural in college—and the only part that people talked about was the 2-inch fish in the corner. That fish earned his name and image as the company logo.

Who do you imagine wearing One Fish?

I originally planned to cater to the urban hipster, limited edition culture but after getting feedback from wearing One Fish t’s around the city I realized the appeal is much greater than I imagined.

What do you do besides creating cool shirts?

Anything athletic. I boxed in college. I ride my bike all over NYC. I also shoot video, for short projects, and music videos.

What’s your backstory?
I’ve lived in NYC my entire life. Drawing in my spare time has been the only consistent in my life. That and my interest in fashion. It’s exciting to join them into a new career.

How do you see the company and the products evolving?

There are so many things I want to do: sneakers, jeans, accessories. I have a specific progression in mind when I look at the greater whole. My goal is to have a fully functional line of clothing so someone can wear a One Fish outfit from head to toe.

What’s next for One Fish?

Along with the first line of t-shirts and hoodies, there’s a promo video in the works, a digital look book and a website that’s launching 11.11.12. The grand plan?  Incorporating video, photography, design and clothing into one unified vision.

Where can people find One Fish merch? 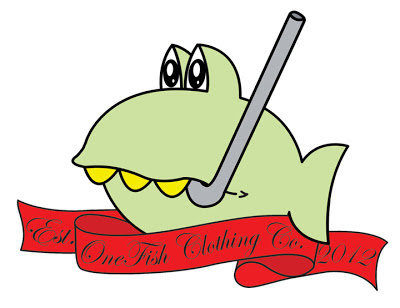 with love and hope for the future
Posted by Elissa Stein at 2:38 PM No comments: